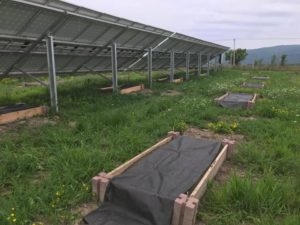 Raised beds established at the Peck Electric Solar Farm in New Haven VT, to test the potential of growing saffron in front, beneath or behind the solar arrays. Corms will be planted in the beds in September and the saffron will be harvested in October.
Photo credit: A. Ghalehgolabbehbahani

The University of Vermont researchers who demonstrated that saffron could be profitably grown in Vermont have teamed up with Peck Solar to investigate the potential of growing saffron within one of their solar fields in New Haven, VT. At a retail price of $5,000 per pound, saffron is the world’s most expensive spice, and the U.S. imports 46 tons annually. The UVM researchers, Margaret Skinner, Bruce L. Parker and Arash Ghalehgolabbehbahani have been conducting research on saffron for the past four years and found that it can be grown in the field, despite Vermont’s cold winter temperatures. To help keep their farms financially viable, farmers have been building ground-mounted solar arrays on portions of their land instead of selling to real estate developers. This has led to vocal opposition from some groups. Their concern is that farmers will take advantage of the lower-risk, higher reward opportunities of energy generation, and discontinue farming, which can be high risk as weather conditions become more extreme and unpredictable.

Over 24 million acres of agricultural land have been lost to development since 1982. A 4.3% drop in the number of farms in the U.S. was observed from 2007 to 2012, and this decline is continuing. Saffron production could reverse that trend.

Peck Solar, a South Burlington, VT-based company, has been a family-owned electrical contractor for over 45 years. In 2008, they entered the solar power arena and have worked on both commercial and residential projects. To date, they have installed over 120 megawatts of solar power generation capacity in Vermont, which contributes significantly towards meeting Vermont’s goal for 90% of the state’s energy needs to be met with renewable energy resources by 2050. Peck Solar has been working with farmers around Vermont to help them capitalize on the value of their land through construction of solar arrays. Steve Yates, Peck Solar’s Project Director, hopes that growing high-value crops like saffron within the solar fields will help keep agricultural land in the hands of farmers and allow them to create revenue by growing crops while generating clean energy. This is the first year of a 2-year project, and the cooperators are hoping for a fruitful harvest this October, with even more in future years

Green Energy Times will follow the progress of this project in our mid-October edition, as the first harvest hopefully proves to be successful. Stay tuned